The Austrian Copyright Society and Blacklisting During the Nazi Era

After the March 13, 1938 Anschluss, Jewish members of Austria’s society of authors, composers, and music publishers (Staatlich genehmigte Gesellschaft der Autoren, Komponisten und Musikverleger), known as the “AKM,” were blacklisted. The nature, scope, and ramifications of the AKM’s 1938-1945 history are the subject of new research in Austria, with the publication of a study expected soon.  1 This study follows on the heels of the first public exhibition of a recently discovered AKM blacklist in the Vienna City Library in 2012.  2  Name by name, this diminutive yet chilling red-lined Nazi-era artifact was a prelude to evolving persecution in Austria for those in the musical world. 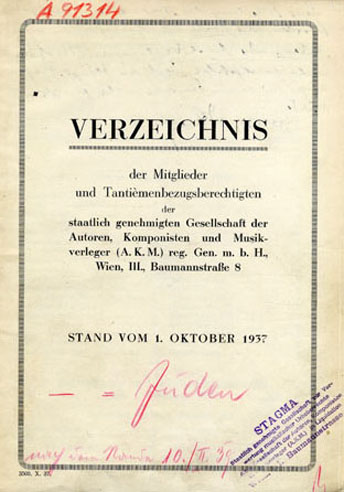 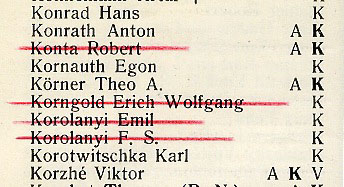 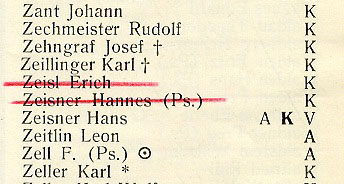 Catalogued as “A91314,” the 1937 AKM membership directory was annotated with bold red lines neatly hand-drawn through the names of Jewish AKM members, along with what appears to be a handwritten date in red of February 10, 1939, on the title page. It is not known who prepared this Nazi-era blacklist or how it ended up on the library’s shelves.  Nor is it generally known whether similar lists of expelled AKM members from successive years up until 1945 are today in the AKM’s archive. Austrian scholar, Dr. Christoph Lind, found the red-lined directory in 2010 among the printed works in the Vienna City Library while he and Dr. Georg Traska were conducting research for their 2012 biography of pianist, composer, and cabaret performer, Hermann Leopoldi, who survived internment in Dachau and Buchenwald.  4

Founded in 1897, the AKM is a performing rights society engaged in the business of granting licenses and collecting copyright royalties for the public performance of the musical works of its members, and distributing such royalties.  After Austria’s incorporation into the Reich, its cultural institutions rapidly implemented anti-Semitic policies.  In 1938, the AKM was placed under the control of the German performing rights society, STAGMA, (Staatlich genehmigte Gesellschaft zur Verwertung Musikalischer Urheberrechte). 5  During the Nazi era STAGMA generally banned Jews from membership and was administered by the Reich Culture Chamber (Reichskulturkammer), and its Reich Music Chamber (Reichsmusikkammer), all under the direction of Joseph Goebbels and the Ministry of Propaganda.  6

“[O]n 17 March 1938, just four days after annexation, AKM’s council had been dismissed, a Commissar Chairman appointed, and a questionnaire sent to all members asking, among other matters, racial and religious questions.”  7  Béla Bartók, a member of the AKM, wrote from Budapest on April 13, 1938, regarding the changed conditions in Austria:

As regards my own affairs, I must say that things are not very good at the moment because not only has my publishing house (U.E.) gone Nazi (the proprietors and directors were simply turned out) but also the A.K.M., the Viennese Society for performing rights, to which I belong (and Kodály, too), is also being ‘nazified’. Only the day before yesterday I received the notorious questionnaire about grandfathers, etc., then: ‘Are you of German blood, of kindred race, or non-Aryan?’ Naturally neither I nor Kodály will fill in the form: our opinion is that such questions are wrong and illegal…we must insist on having nothing to do with this unlawful questionnaire, which therefore must remain unanswered….”  8

Universal Edition was one of many music publishers Aryanized or otherwise misappropriated during the Nazi era.  9  “After the Anschluss…a State Commissar was appointed by the German Ministry of Propaganda for UE and Mrs. [Jella] Hertzka [a member of the Universal Edition Board of Trustees] was compelled to sell her shares to him.”  10

A handwritten note inside the AKM directory found in the Vienna City Library explains that some members had not yet been crossed off the list because they had not submitted their completed questionnaires.  The missing information was reportedly later provided by Heinrich Damisch and Helmut Wobisch, who identified Jewish AKM members.  11  Heinrich Damisch, music critic, writer, and former director of the Wiener Mozartgemeinde, despite his authorship of the 1938 anti-Semitic article Die Verjudung des österreichischen Musiklebens and other efforts, was honored post-war in Austria.  12  Helmut Wobisch, an ardent Nazi party member, was a trumpeter with the Vienna Philharmonic during and after the Nazi era, as well as managing director of the Vienna Philharmonic from 1953 to 1969.  13

According to one estimate, those persecuted by the AKM constituted approximately forty-two percent of the membership.  14  Throughout the Reich, musicians were similarly the subject of blacklisting in the Lexikon der Juden in der Musik, edited by Nazi musicologist and head of the Nazi Sonderstab Musik (a plundering task force), Dr. Herbert Gerigk and his co-editor Dr. Theo Stengel.  15

The 1935 Nuremberg racial laws were adopted in Austria on May 20, 1938.  Performances of compositions by Jewish composers and authors were generally banned under the Reich.

Until 1942, catalogues that featured Jewish composers, along with printed scores by Jewish composers, were either consigned to be pulped, or marked as unavailable for sale or performance. Sales of scores by Jewish composers from antiquarian shops were to be restricted to music historians, and clearly marked with the letter ‘J’ along with a visible explanation as to its meaning.  However, most publishers had taken the precaution of producing multiple copies, so that when some 30,000 printed scores and books were confiscated from Universal Edition, almost everything could be recovered later.  16

Copyright royalties due to persecuted AKM members or their heirs would primarily have resulted from performances outside Axis and occupied nations.  Copyright royalties due to blacklisted AKM members and collected by the AKM inured to the benefit of the Reich under the Eleventh Decree to the Reich Citizenship Law, passed on November 25, 1941.  This legislation provided the Reich with legal authority to seize the assets of persecutees living outside the Reich’s borders, including those who had been deported or gone into exile.

Post-war claim files in the United States National Archive provide evidence reflecting alleged AKM copyright losses, amid claims for a vast range of confiscated property.  This was the case with Viennese librettist and playwright Alfred Grünwald, who stated, “When Hitler marched into Vienna I was taken into ‘security-custody’ – which means imprisoned and released only under the condition that I leave Austria in four weeks!”

Among his many losses, Grünwald said of the AKM:

I was member of the directorium of the A.K.M. (Oesterreichische Autorengesellschaft, Wien III.  Baumanngasse 8) and in this capacity co-owner of the whole assets of this great society and entitled to a lifelong pension.  One day before my arrest they forced me to renounce my membership and to declare my disinterest in the A.K.M.  17

Grünwald fled from Vienna to Paris where he “had to escape in the middle of the night,” his residence plundered, then to Morocco and eventually to the U.S.  After “a life long full of work and thriftiness,” Grünwald reported on November 23, 1945, all his property had been stolen, confiscated, or forcibly sold.

Song writer and playwright Hans Jan Lengsfelder similarly wrote to the U.S. War Department Headquarters in Vienna on June 7, 1946, making a claim against the “Gesellschaft der Autoren, Komponisten und Musikverleger [the AKM] Vienna III, Baumann Strasse 8, for royalties collected for public performances of my works plus claims against the pension fund and a share in the assets of the society.”  Lengsfelder also sought from “Austromechana…royalties collected for records of my works.” 18

Music publisher Franz Sobotka, who owned several music publishing houses in Vienna, which he identified as “Edition Bristol,” “Europaton Verlag,” and “Sirius Verlag,” fled Austria in mid-May 1938 with his wife, immigrating to New York, after he learned he was at risk of imminent arrest by the Gestapo.  He reported to the U.S. Military Government, Headquarters Vienna,  “my entire fortune was confiscated,” claiming that his music publishing houses and proceeds due to him from the AKM had been misappropriated.  19

In an effort to recover lost AKM copyright royalties, on June 9, 1941, Franz Sobotka filed suit in New York for royalties collected by the American Society of Composers Authors & Publishers (ASCAP) for the AKM, resulting from U.S. performances. Sobotka alleged that under a contract between the AKM and ASCAP, which ran from January 1, 1933 to December 31, 1938, $62,809.85 had accrued to AKM’s account.  The AKM had granted to ASCAP the exclusive right to license in the U.S. the public performance rights in certain musical works.

Sobotka’s claim was complicated by the fact that the AKM had allegedly been liquidated during the Nazi era, that AKM royalties in the U.S. had been tied up as “blocked assets” and characterized as “alien property” under U.S. law in light of a wartime order freezing such assets under the Trading With the Enemy Act.  20  Although the outcome of Sobotka’s claim against the AKM is unclear, his lawsuit and the post-war claims of other persecuted AKM members raise a host of unanswered questions, including whether, and to what extent, uncompensated royalties accrued to persecuted composers, authors, and music publishers on U.S. soil, and elsewhere, during the Nazi era.

The AKM was reestablished in Austria as a new institution after World War II.  The content of the AKM archive is not generally known. The study of the AKM’s 1938-1945 history, and its aftermath, currently under preparation by musicologist Hartmut Krones and commissioned by the AKM in 2013,  21 will be a welcome addition to the evolving literature regarding music suppressed during the Third Reich and the many lives of those tethered to it.

Note:  To view a PDF of the entire blacklist, click here.

Carla Shapreau teaches art and cultural property law at the University of California, Berkeley, School of Law, and is a Research Associate in the Institute of European Studies at U.C. Berkeley, where she is conducting research regarding music-related losses during the Nazi era and their 21st century ramifications.  Dr. Shapreau is co-author of Violin Fraud—Deception, Forgery, Theft and Lawsuits in England and America, Oxford University Press, and has written and lectured broadly on the topic of cultural property. She is also a violin maker.