Krenek was born in Vienna in 1900 and, like his compatriot Korngold, was a prodigy, beginning his composing career at the age of six (though his Op.1 dates from his seventeenth year).  A decade later he began his studies with Franz Schreker at the Vienna Music Academy.  Though Krenek would eventually break with Schreker as his music became more atonal, the composer played a major role in his early thinking about music.  His first works are written in a late Romantic style, and already Krenek displays an almost Mozartian reach, writing pieces for keyboard, chamber ensemble, orchestra and operatic forces (in his career he wrote twenty-two operas).

In 1920 Krenek moved to Berlin to continue his studies with Schreker, and there he met such influential musicians as Busoni, Hermann Scherchen and Artur Schnabel.  Though he had begun his career writing in a late Romantic idiom, by the early 1920's he adopted an uncompromising atonal style.  In 1922 he completed his Second Symphony, Op.12, a major work of epic proportions that reveals the young composer at his most original.  Two massive outer movements, each more than twenty-five minutes in length and characterized by slow introductions, where ideas and concepts slowly emerge out of a kind of primordial ooze, surround a motoric Allegro half that length, consisting of a series of contrapuntal expositions.  While it has been noted that there is much Mahler in this composition (to make the comparison more tempting, Krenek had married the composer's daughter Anna just before he began composing the symphony), the work also stands apart from the spirit of Mahler and moves in what are, arguably, even riskier directions.  Around this time Krenek also completed his first dramatic work, the scenic cantata Die Zwingburg based on a work by Demuth and a libretto by Werfel, a classic expressionist work of alienation and social commentary.

Between 1923 and 1925 Krenek spent time in Switzerland, where he met such figures as Friedrich Gubler (an editor of the Frankfurter Zeitung) and the poet Rainer Maria Rilke.  He also met Theodor Adorno at this time, and their lively polemics on the subject of new directions in music is one of the most exciting intellectual exchanges of its time.  During this period he also visited Paris, where he became acquainted with Stravinsky's neoclassical style, particularly Pulcinella, and with the music of Les Six.  Returning from France, he befriended Berg, Webern and Schoenberg.

Out of this ferment and virtual explosion of styles came the only work that Krenek could count as an unequivocal public success: the opera Jonny spielt auf (Johnny Plays On).  Combining the eclecticism of the times with a nod at a kind of “Euro jazz” as cultivated by Stravinsky and Milhaud in La Boeuf sur le toit, the piece was an instant hit and gave rise to hoards of imitations.  Set in nightclubs, glaciers and trains, and referencing almost all the available styles of the time in some guise or other, the opera tells the story of the lovers Max and Anita and their travels through the demimonde, and especially their connection with the black violinist Jonny, who steals an Amati violin.  The symbolic aspects of the tale, especially the contrast between the self-absorbed Central European intellectual and the “free man” Jonny caught the imagination of audiences throughout Europe.  The opera was performed in dozens of different opera houses, and made its way to New York as early as 1929.

Ironically, it was the very success of Jonny, in particular its use of “jazziness,” that made things difficult for Krenek later on.  As the Nazis continued their inexorable rise to power, certain vernacular styles became convenient targets for the Nazis, and it was inevitable that Jonny would end up being considered what some started calling “degenerate music.”

Of course, despite the runaway success of the work, it was hardly typical of Krenek.  More characteristic, one could argue, was his other major operatic work of the period, Karl V, commissioned by the Vienna State Opera and completed in 1933.  The work deals with the life and ideals of the Holy Roman Emperor Charles V, who ruled Austria in the 16th century (1500-1558).  As he did research for the project, Krenek became convinced that the emperor embodied a kind of Christian humanism that could oppose the barbarity of current political movements. For this special project, the composer used a musical approach that was to color his works for the remainder of his career: the twelve-tone system.  Though he took a different attitude towards dodecaphonic music than Schoenberg, he believed greatly in its rigor, its uncompromising standards and its possibilities for further development.  The opera was due to be performed in 1934, but was cancelled and not performed until almost fifty years later as a major gesture of reconciliation.

Krenek remained productive throughout the 1930's, devoting a great deal of time to writing essays and lecturing.  It was in 1937 that he first visited the United States.  He made a second trip to the US the following year and was intending to return to Austria when the Anschluss of 1938 made that impossible.  Krenek ended up staying in the United States and accepting a position in the Department of Music at Vassar College.  Despite the fact that he had been a rising superstar in European musical circles, in the United States he was just another exile, and despite good connections, he struggled to find a position that would allow him both the freedom to compose and an environment where he could put his pedagogical theories into practice.  Some of the conflicts that were to dog his career appeared early on in Vassar, where the assumption was that he would contribute to teaching music as a liberal art.  Krenek felt strongly that even as such, it was important for students to understand the rigor of composition, particularly twelve-tone composition, even if they never became composers, and in his high-minded but probably inflexible style, he alienated the rest of the music faculty and was forced to leave.

Despite these conflicts, he was characteristically prolific.  His continued efforts to freshly exploit the twelve-tone system and comment, through the lens of Christian humanism, on ongoing events led to the composition of Lamentatio Jeremiae Prophetae in 1942.  Based on the biblical writings of the Prophet Jeremiah, the Lamentations is an astonishing work for a cappella voices.  It explores intersections of various historical musical tendencies, and invokes a special musical spirit through the linkage of twelve-tone and modal tendencies.  In this work, contemporary style and basic principles of Netherlandish counterpoint mesh with an expressive power that is sustained for more than an hour.

In 1942 Krenek received an offer to become a professor and head of the Department of Music at Hamline University in St. Paul, Minnesota.  Despite the small size and budget of the institution, this proved a productive time for the composer.  Not only were the teaching conditions at the college congenial, but the conductor of the Minneapolis Symphony Orchestra, Dimitri Mitropoulos, took a keen interest in Krenek's compositions and performed several of his works with the orchestra including the Second Symphony (which got a frosty reception) and the Piano Concerto No. 3 (which was a hit).  Krenek also helped to found a local chapter of the International Society for Contemporary Music that played a major role in local musical life and offered many significant premieres.  Despite these activities, Krenek never really reconciled himself to the region (He once remarked: “I wonder what desperation drove people to settle in this latitude”) and rather suddenly departed for the West Coast in 1947, leaving a good deal of bad feeling behind.  Aside from a visiting stint here and there, Krenek was to spend the rest of his life in California, in Los Angeles and Palm Springs.  During this period he continued to compose conduct, teach and write.

Krenek's California years cannot be characterized by a single style or approach; indeed, the period contains over 100 compositions, including experimental works such as From Three Make Seven (1961) and Fibonacci Mobile (1964), takes in electronic works inspired by his visit to Cologne in 1955, and includes such autobiographical pieces such as The Dissembler (1978) and Spätlese (1972).  The latter in particular is a fine example of emotionally intense but technically more relaxed later style.  Beautifully written for the voice, and profoundly expressive, the six poems reflect on the joys and bitterness of life, and on coming to terms with oneself.

Starting in the 1960's, and continuing for the remainder of his life, Krenek was honored in many ways, most appropriately, as far as the composer was concerned, through a production of Karl V in Vienna in 1983.  Many festivals of his work were mounted, especially in California.  His last work, a Suite for Mandolin and Guitar was written in 1989.  The composer died in 1991. 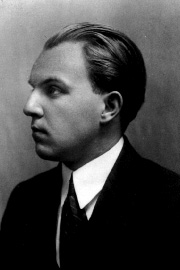